Up Close and Personal

Have you ever been accosted by a clay disc? Has a deer or pheasant ever fired back at you? Can you imagine being robbed from 500 yards away? Marksmen likely would resort to similar fundamentals in each of those different applications, but marksmanship is just the tip of the iceberg when it comes to personal protection. Sporting, hunting, and sniping all have distinct appeals and utilities. However, if your goal is practical self-defense, then your training must be grounded in that very unique context. With these distinctions in mind, the Second Amendment Foundation has been hard at work developing a new Training Division, which officially launches nationwide in January of 2015.

SAFTD has assembled some of the most experienced defensive trainers in the country to create a curriculum that is laser-focused on modern personal defense. Their instruction has nothing to do with politics, profits, or popular “tacti-cool” maneuvers and gadgetry. Instead, every course is geared towards a single goal: equipping everyday folks with effective tools to survive the kinds of hostile encounters they can realistically expect to face in today’s world.

Throughout my teenage years, firearms were a mystery to me. So, too, was violence — let alone the thought of having any power to repel it. Self-defense meant simply calling the police. Only through tragedy did I realize that personal safety is very personal indeed. My welfare is no one’s responsibility but my own. And although it was a painful lesson to learn, I am forever grateful that a group of trainers welcomed me and took the time to demystify the concept of deadly force as a last resort.

A few short years later, I became a firearms instructor myself, eager to empower others with the knowledge that my trainers had instilled in me. Many of those trainers are now at the helm of the SAFTD. So when the opportunity arose for me to be a part of that team, I did not hesitate. I applaud the Training Division’s effort to ensure that the Second Amendment continues to enrich and secure all American walks of life.

Of course, there’s absolutely nothing wrong with trapshooting — or any other pastime that encourages discipline, patience, and precision. But when you need a knife, you don’t grab a spoon. And if you hope to be mentally, physically, and technically prepared to fend off a red-blooded rival, plinking at tin cans in the back yard will not suffice. Instead, contact SAFTD. Sign up for a class. Look for opportunities to learn and to teach. Whether you’re a newcomer or a Navy SEAL, we look forward to training with you. 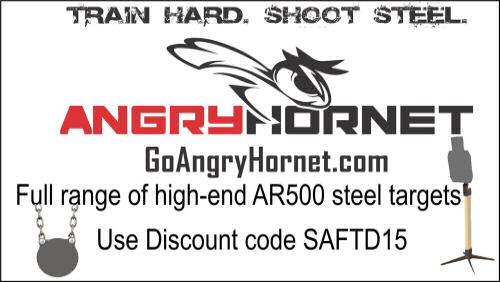